Music illuminates even the darkest moments. Just when you need it the most, a song lets in a sliver of light. It doesn’t matter how dark it gets out there, we’ve got Sticky Fingers. Theirs is an underdog story already worthy of a tell-all memoir or old school Behind The Music. The quintet—Dylan Frost [lead vocals, guitar], Paddy Cornwall [bass, vocals], Seamus Coyle [lead guitar], Beaker “Beaks” Best [drums, percussion], and Freddy Crabs [keys, synth]—accomplished the seemingly impossible as a wholly independent act since just 2008. Affirmed as one of Australia’s biggest bands, they’ve delivered three straight Top 5 albums, earned ARIAA platinum and gold plaques, eclipsed 1 billion streams, and sold out the continent’s most hallowed venues usually reserved for the likes of Elton John and Post Malone. However, their earthquaking hybrid of rock, alternative, reggae, and psychedelic burns brighter than ever on their 2021 fifth full-length offering, We Can Make The World Glow.

“We wanted to make an uplifting record,” exclaims Seamus. “So, we tried to create something more positive and push through the darkness.”

“It’s personal for all of us,” Dylan elaborates. “We’ve all gone through it with the lockdowns, COVID, and our own demos. It came out naturally like a fucking revolution. Let’s get through everything. Let’s flourish. It’s a mission statement, ‘Yeah, we can make the world glow’.”

The light was already pretty damn bright for Sticky Fingers. On the heels of their fourth offering Yours to Keep in 2019, they launched a massive tour that left packed arenas and stadiums screaming for more across Australia before they took over New Zealand, Chile, and Brazil. As the Global Pandemic shut down touring, the band turned their attention to writing and recording. Initially, they’d plotted an acoustic record. Even those plans would be scrapped, the sentiment coursed through the DNA of the sessions to follow.

“On prior albums, we’d spent a lot of time facing a computer and fucking around,” says Paddy. “Since we went into the record thinking it was going to be an acoustic album, we were writing songs that were more natural and organic. They were stripped back to just acoustic guitar, piano, and lyrics. It was a really good way to mix it up from the last couple of albums. We wanted it to be live-sounding.”

In the summer of 2020, Paddy, Seamus, Beaks, and Freddy decamped to “a local shitty motel” for three months as they visited Dylan’s house every week to write. Between writing and recording, personal demons crept up. Dylan pulled through multiple overdoses, and Paddy also checked into rehab. These brothers supported one another throughout the storm as they headed to Grove Studios up the Central Coast with original guitarist Taras Hyrubi-Piper behind the board as producer and longtime producer Dann Hume as mixer.

“Dann couldn’t make it down with all of the lockdowns, so we called Taras,” Seamus says. “He’s been an important character in the songwriting process, and he’s remained a fifth Beatle, so to speak. It created an opportunity for him to step up. Dann’s still a part of the mix. It’s the first Sticky record we’ve had a different producer on.”

“Taras brought some of the early energy back,” adds Crabs. “It’s a reset. You can hear some of those old sounds. We got those psychedelic feels from our debut Caress Your Soul with better musicianship.”

On the lead single and title track “We Can Make The World Glow,” Dylan leans into a simmering beat with a soulful croon before a reggae bounce takes over with a weightless hook, “We can make the world glow, living life in ecstasy, bouncing off your gravity.”

“We were trying to reach out for positivity,” states Paddy. “The lyrics are fun.”

Meanwhile, “My Rush” unfolds as a somber hymnal over underpinned by an ominous electronic beat, eerie guitar transmissions, and hypnotic dirge. He intones, “This world is insane. Believe me ‘cause I’m, I’m back from the dead.”

“I predicted my death because I was in ICU for eight hours,” admits Dylan. “Looking back on it, I lost my shit.”

Getting gleefully sentimental, acoustic guitar and soft vocals entwine on “Love Song Bayonet.” On the other end of the spectrum altogether, “Lupo The Wolf” details the story of the titular Sicilian gangster famous for “becoming a kingpin and chopping people into taters.”

Tapping into a nostalgic spirit, the wistful melodies of “Where I’m From” recounts “four seasons in a day, memories of being on the road, and living together—remembering where we’re from,” according to Paddy.

“Sticky has never been a band to stick to one particular genre,” Paddy observes. “From song to song or record to record, we jump around and do whatever the fuck we want. We’re going to satisfy our old school fans, while pushing sounds we’ve never explored before.”

Even through all of the madness and darkness, Sticky Fingers glow more than ever before.

“It’s worth celebrating after a fifth album,” Crabs leaves off. “We can look bad and realize we’re not half bad at what we do. I don’t think any of us can imagine doing anything else. I don’t know how we’d live, because we’re so used to this. It’s the most positive addiction we’ve all got.”

“If we had a message, it’s, ‘Fucking go for it’,” Dylan concludes. “Don’t let anyone tell you that you can’t do something—because you can. Just don’t be lazy. Whatever you do, don’t take two-and-a-half years to finish an album,” he chuckles.

“With good reason…it should be stated Paddy and Beaks didn’t really know how to play,” Freddy chuckles. “However, we learned everything as we went along. That goes from playing early shows to getting to stadiums. It’s real D.I.Y., but we were always bound by our friendship first. We still are.”

“Since coming from an asbestos-covered garage at my parents’ place,” smiles Beaks.

From the onset, the guys dreamed of performing at a big free community gig, Newton Festival, which repeatedly turned them down year after year. Flipping a middle finger to the establishment (the first of many times), they improvised. Their friend lived in view of the festival, so they convinced her to let them “play a small show in the backyard.” She nervously said, “Yes.”

Overnight, Sticky Fingers erected a stage out of 200 milk crates supervised by Beaks (who just so happened to hold down a job in construction at the time). As soon as the festival let out, the musicians took the makeshift stage and delivered a headline-making performance, attracting the attention of producer Dann Hume at the same time. This kicked off a fruitful creative partnership, which continues to flourish.

“We unofficially headlined the festival when everybody was rolling out,” recalls Dylan. “All of our mates were there just fucking having a party on the roof, ripping the palm trees, and going nuts. It was a little kick off to our career. The journey shapes you though, not the destination, right?”

The group introduced themselves on their 2013 full-length debut, Caress Your Soul.

When it comes to the sound, Dylan deems it, “Erotica-pyscho-tropica…sex, pugs, and rock ‘n’ roll!”

“We’ve always had the ideology, if it feels good to us, it’s going to make someone else feel good as well,” states Paddy.

Fans everywhere felt the same way as the album eventually achieved an ARIAA platinum certification. 2014’s Land of Pleasure went gold, bowed at #3 on the Australian Albums Chart, and kicked off a string of three consecutive Top 5 albums. In 2016, Westway (The Glitter & the Slums) bowed at #1, cementing them as Australia’s hottest export. As Yours To Keep clinched the #4 spot on the charts upon arrival, Sticky Fingers launched their biggest tour to date, selling out arenas and stadiums across the continent. As always, they did it under-the-radar by announcing and promoting the shows via social media. 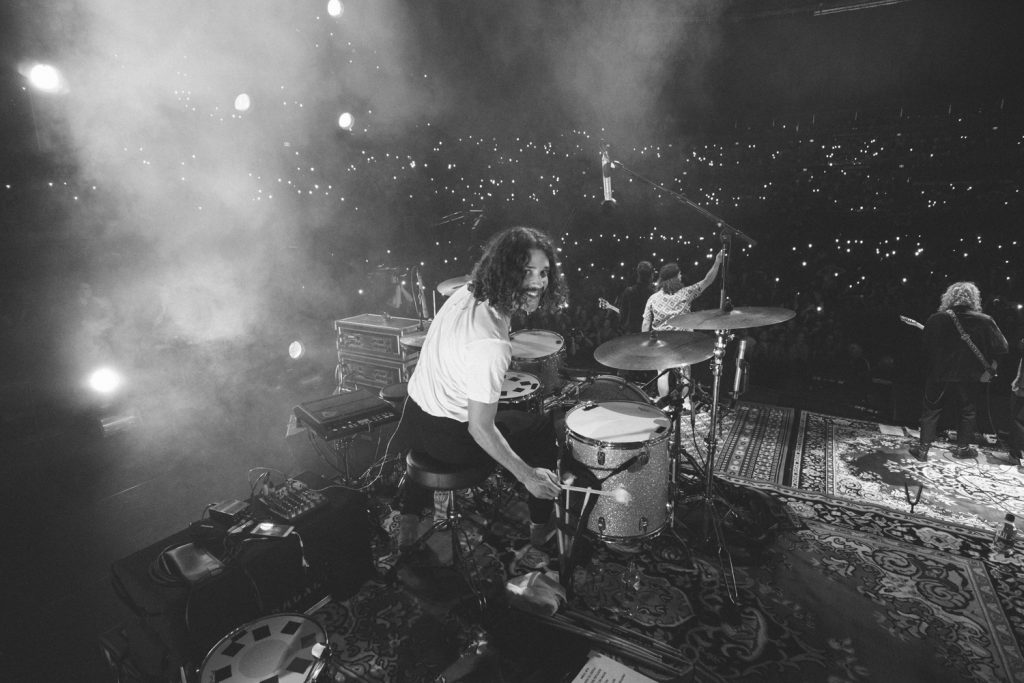 Along the way, Sticky Fingers supported various philanthropic organizations. On their 2019 tour, they teamed up with Cairo Skateboards to manufacture skateboards and Street X for special edition merch to raise money for the Rural Fire Service New South Wales. Over the course of just one run, the band raised more than $250,000.

“New South Wales was hit the worst,” sighs Freddy. “That’s where we’re from, so we decided to help however we could.”

Yours To Keep marked not only a creative breakthrough, but a personal breakthrough as well. It would be the first time they recorded sober, and the unpredictable grooves, airtight hooks, danceable bounce, and sterling musicianship affirmed their evolution.

“In many ways, that record was quite triumphant,” Beaks goes on. “We were actually able to live a healthier lifestyle and not be just another story of addiction and ultimately death and demise. We didn’t want to repeat the old story.”

“I’m proud we’ve got through our experiences so far and we’re not dead,” adds Dylan. “There have been a couple of close calls where we’ve been knocking on heaven’s door. However, we’re here as family, baby!”

In the end, the family only grows stronger as time goes by. As they ready their fifth album for 2021 and more surprises, Sticky Fingers welcome everyone to join them.

“We’re going to write songs and tell stories about feeling low, getting high, and everything in between,” Paddy remarks.

“This is a band of brothers,” Freddy leaves off. “You can go through shit and have your demons, but we’ll stick together and push through it.”

“Even in these dark ass motherfucking times, there’s always a light at the end of the tunnel,” Dylan concludes. “It’s been said before, but it’s fucking real. That’s Sticky Fingers to me.”

GET UPDATES ON SHOWS